SLOPE/W, in one form, or another has been on the market since 1977. The initial code was developed by Professor D.G. Fredlund at the University of Saskatchewan. The first commercial version was installed on mainframe computers and users could access the software through software bureaus. Then in the 1980s when Personal Computers (PCs) became available, the code was completely re-written for the PC environment. Processing time was now available at the relatively low fixed cost of the computer, but computer memory was scarce and so the code had to be re-structured for this hardware environment. The product was renamed PC-SLOPE and released in 1983. Later in the 1980s it became evident that graphical interaction with PC software was going to be the wave of the future, and consequently a graphical CAD-like user interface was developed. The software was again renamed as SLOPE/W to reflect the Microsoft Windows environment and that it now had a graphical user interface. SLOPE/W was the very first geotechnical software product available commercially for analyzing slope stability.
Currently, SLOPE/W is being used by thousands of professionals both in education and in practice.
Over the years, as computer technology has advanced, SLOPE/W has continually been enhanced and upgraded. 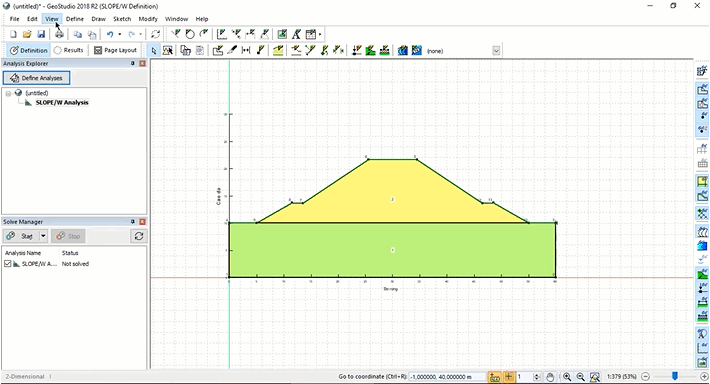 When using software like SLOPE/W with its myriad of options, it is often necessary to look at more than just the factor of safety. Other issues to consider include, but are not limited to: Was the intended data correctly specified? Was the data used correctly by the software? Why are there differences between factors of safety from the various methods? To help answer these types of questions, SLOPE/W has many tools for inspecting the input data and evaluating the results – tools like allowing you to graph a list of different variables along the slip surface or to display the detail forces on each slice, for example. These types of tools are vitally important to judging and being confident in the results.
Earlier it was noted that despite the extensive use of limit equilibrium methods in routine practice, the fundamentals of the formulations and the implications of the inherent assumptions are not well
understood. An entire chapter is consequently devoted to a review of the fundamentals of limit
equilibrium as a method of analysis. The chapter looks at the consequences of a pure statics formulation, what are the differences between the various methods, why are interslice forces important, what effect does the shape of the slip surface have, and so forth. In addition, the chapter discusses the limitations of the limit equilibrium method and discusses ways of overcoming the limitations. Gaining a thorough understanding of these fundamentals is essential to effective use of SLOPE/W.

SLOPE/W is one component in a complete suite of geotechnical products called GeoStudio. One of the powerful features of this integrated approach is that it opens the door to types of analyses of a much wider and more complex spectrum of problems, including the use of finite element computed pore-water pressures and stresses in a stability analysis. Not only does an integrated approach widen the analysis possibilities, it can help overcome some limitations of the purely limit equilibrium formulations.
Although, it is not necessary to use this advanced feature as SLOPE/W can be used as an individual
product, there is certainly an increase in the capability